We report with gratitude and satisfaction the special article for the founder of Fucina Artistica Boranga signed by the journalist Laura Bon and published by Il Gazzettino Sunday, December 30, 2018.

In the Fucina Artistica by Gianfranco Boranga the wrought iron gates take shape.

Heir to a dynasty of blacksmiths, his work requested all over the world.

The headquarters of Fucina Artistica Boranga surrounded by the green Montello

That the working of iron is an art that has something magical, almost divine, first understood the ancient Greeks who attributed it to a deity: Hephaestus, the god of fire and metallurgy, Vulcan for the Romans.

And if you go to Giavera in Gianfranco Boranga’s Fucina Artistica, you fully breathe the meaning of this art: in the words and in the eyes of the owner, in the exhibited objects, in the sense of belonging of those who work in the workshop. It is a relatively small group of employees, about a dozen in all, in addition to various collaborators who, however, fly artistic products from Rome to London, from Dubai to Uzbekistan. 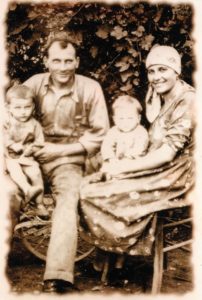 And the gates of Boranga surround pieces of history, such as the Colosseum, or enrich the homes of heads of state. In those gates, in those stairs, carefully worked, all different from one another, iron, as in the ancient workshop of Hephaestus, is heated not only in a literal sense and softens.

The art of the Master Gianfranco Boranga is not born from nothing but has its roots in the family tradition and has been strengthened over time as well as by the study of the teaching of precious masters. The roots of the Boranga are first of all those of the blacksmiths of Maniago in Friuli, famous since the Middle Ages for the production of tools for domestic use but also for weapons. And Giuseppe Boranga, Gianfranco’s great-grandfather, born in 1824 in Giavera, descended from them.

That profession was then taken by Giuseppe’s nephew, Luigi Giovanni Boranga, father of Gianfranco. Trained at the school of Luigi Serena learned the art of forging at the smiths Grosso (Calderer) of Camalò. Then in 1923 he started his own company in Cusignana and from the collaboration with the architect Scudo di Crespano born splendid artifacts still visible: the canopy of the Madonna Assunta di Cusignana, chandeliers, statues depicting sacred images, lids of baptismal sources in the Cathedral of Asolo, Churches of San Zenone, of Santa Maria della Vittoria, of Arcade, of Visnadello.

In fact, in the workshop of Cusignana he learned together with his brothers Ladislao and Piergiorgio the craft of the blacksmith. “I remember -Gianfranco notes- that since I was a child when I went to school in the afternoon I still helped my dad in the laboratory. I’ve always done it “. And there is no lack of anecdotes that filter through memories such as that time when “the parish priest of Asolo preached in church saying that it needed copper to cover the baptistery and people brought the pots from home”.

But after the fifth grade, Gianfranco also studied at the Spresiano arts and crafts school. For a period then he was a student of Toni Benetton. An inestimable heritage of knowledge and skills to be transmitted. And he did it with passion and commitment, first moving the company to the former Montecatini in Montebelluna, then returning in 2015 to Giavera where he still operates (and where the showroom can be visited).

Actually the presidency passed to the son-in-law Valeriano Bianchin. But Gianfranco, who at the age of 86 still retains the lively eye of a boy, is there telling the latest products: a handrail for the Prince of Qatar, a ladder for the president of Uzbekistan. And many other jobs for villas and hotels in Japan, Great Britain, Saudi Arabia, Guinea, Chad, the Principality of Monaco, Russia, USA, Switzerland, Kazakhstan, Mozambique and of course Italy also for companies like Replay, Fassa Bortolo, Mapei and Luxottica just to mention the best known.

“We had the satisfaction -says Gianfranco- to have as commissioner the Superintendence of the Archaeological Ministry for Cultural Heritage and Activities of Rome, for which we made the fences and deletions of some of the most important monuments: the Colosseum, the Arch of Costantino, the Pyramid of Caius Cestius, the Mausoleum of Saint Elena, the Arch of Gallienus “. Instead of Gaudì Gianfranco reproduced a gate with floral elements in Barcelona.

Born from the hand and the mind of a man, Gianfranco Boranga in his Fucina Artistica

All born from the hand and the mind of a man. Indeed of a “dynasty”. Hephaestus sure would be proud of it.